Restriction on Number of Layers Rules: exemption for first layer or any layer of Wholly Owned Subsidiary?

The Ministry of Electronics & Information Technology (MEITY) had issued an Office Memorandum No. 24(4) / 2019-CLES dated 13 September 2019 to form an eightmember committee (Committee) to deliberate on the data governance framework. The main objective of the Committee was to study various issues relating to Non-Personal Data (Non-Personal Data) and to make specific suggestions for the consideration of the Central Government on regulation of the Non-Personal Data. The Committee released its Report (Report) for public consultation and feedback and has set a deadline of 13 August 2020 for comments from the public.

The Companies Act, 2013 (‘Companies Act’) read with the Companies (Restriction on Number of Layers) Rules, 2017 (‘Layering Rules’) provides that a company is not allowed to have more than 2 (two) layers of subsidiaries. This restriction was introduced to prohibit companies from misusing multiple layers of subsidiaries, by creating shell companies for diverting funds or money laundering.

The Layering Rules exempts specified companies from this restriction. Exemptions are for certain type of companies, acquisition of foreign companies and one layer of wholly owned subsidiary/ subsidiaries (‘WOS’).

Such holding companies should not have layers of subsidiaries beyond the prescribed number.

The section further defines a layer in relation to a holding company as a subsidiary or subsidiaries.

Rule 2 of the Layering Rules restricts the number of layers for certain classes of holding companies. It states that no company is permitted to have more than 2 (two) layers of subsidiaries.

Additionally, such companies could thereafter, not have any additional layer(s) of subsidiaries in excess of the layers already existing, at the time of notification of the Layering Rules.

Non-adherence with any provisions of the Layering Rules will attract fines on the company and every officer of the company who is in default.

Companies exempt from restriction on number of layers

The following classes of companies are exempt from restriction on number of layers:

A company is not restricted from acquiring a company incorporated outside India with subsidiaries beyond 2 (two) layers or as per the local laws of such country.

Exemption for WOS and Analysis

A layer of a company that consists of 1 (one) or more WOS will be exempt while computing the number of layers of that company.

The proviso to rule 2 of the Layering Rules that provides for this exemption essentially states that, a company may have a layer of WOS in addition to having 2 (two) layers of subsidiaries.

Breaking down the language of the proviso, a layer of a company, consisting of 1 (one) or more WOS, will be exempt. 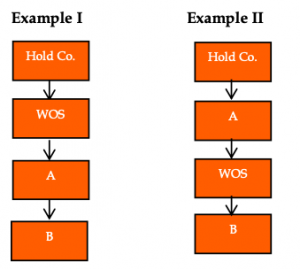 The proviso provides for an exemption of one layer of WOS. There is uncertainty with respect to which layer is referred to here. Whether this should be interpreted to mean the first layer under the holding company (Example I), or if it may be interpreted to mean any layer in the structure and not the one immediately following the holding company (Example II).

In Example II, we see that the WOS is not immediately after the holding company.

As previously mentioned, a ‘layer’ is defined under the Companies Act in relation to a holding company as a subsidiary or subsidiaries.

Further, while interpreting the Layering Rules, we must also consider the legislative intent behind introducing the said rules. The Layering Rules were introduced to restrict the number of layers of subsidiaries with a view of prohibiting companies from misusing the multiple layers. We note that this purpose is achieved regardless of which view is taken.

That is, in either view, the overall number of layers below a company in a structure remains the same, i.e., 3 (three). The holding company would have 1 (one) layer of WOS and 2 (two) layers of subsidiaries. Whether the WOS is in the first layer or third layer, the total number of layers (including WOS) cannot exceed 3 (three).

In the absence of any clarity on the above however, the same remains a matter of debate.

Generally speaking, most people favour the interpretation that the WOS should be immediately following the company for which the number of layers is being computed. Clarity on the same through the legislature or through judgments is much awaited. 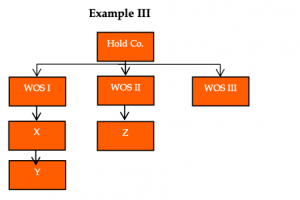 Accordingly, in Example III above, all 3 (three) WOS of the holding company, in a single layer would be exempt.

As there is no clarity on which interpretation should be taken, first layer or any layer, both views may be considered. We look forward to clarification on this through the legislature or judgments.