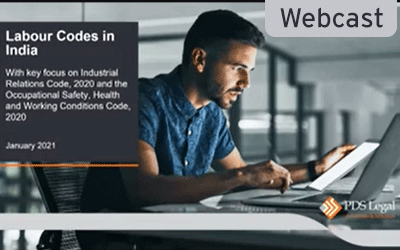 Despite India having the second largest labour workforce in the world, the industry often struggles with labour unrest resulting in serious financial and reputational implications for corporations. Recent examples of such unrests include events at several multinational corporations such as Maruti, Honda, Wistron Infocomm. Typically, the factors behind such unrests include lack of trust between trade unions/associations and the management, wage related issues, discrimination, or poor employment conditions. Current labour legislations in India often fail to effectively address issues faced by the industry and it has been highlighted time and again by the courts in India. The recent pandemic and related issues faced by the labour population in India has brought the issue of labour unrest to the forefront causing the Indian government to try and address such issues in the Industrial Relations Code, 2020 and the Occupational Safety, Health and Working Conditions Code, 2020.

Our subject matter experts discussed and highlighted legal issues surrounding labour unrests and the manner in which the new labour codes attempt to address the same in the webcast titled ‘Labour Codes in India – key focus on Industrial Relations and Occupational Safety, Health and Working Conditions code, 2020.